New horizons in the Earth orbit

The Apollo 11 moon landing clears the counters for the race to space.
The goal of the first man on the moon is American, the Soviets get over it and focus their attention in other directions.
Even the United States, having borne fruit of their efforts, can devote themselves to the next steps of the ladder towards the galaxy.
While the Soviet Union begins the design of space stations, a strategy that aims to ensure a human presence in space, the United States tries to achieve a standardisation of space transport, to lower its costs.
It is the prelude to a new era. The two superpowers are committed to tracing different routes, but with an emerging awareness: collaborating is no longer a taboo.

The Saljut Programme, the Mir and the Buran

On 19th April 1971, the Soviets launch the first space station. The result remains halfway because the Soyuz 10 spacecraft, which was supposed to carry the cosmonauts destined for the station, fails the docking procedure. Soyuz 11 is more fortunate but only initially; the mission's epilogue is tragic as, due to a failure, all the crew members die on their way back. The accident that occurred at Soyuz 11 blocks the transport of any further cosmonaut to Saljut 1, which returns to planet Earth after 123 days. It is October 1971.

A lot is owed to the Saljut space stations, their design and construction constitute an essential step for the development of the technologies that, subsequently, allowed the prolonged permanence in space.

Five years later, the Russian space programme obtains new lymph and a project to be carried out. The Mir space station replaces the four Saljut stations and the innovations it brings are many. First of all, the concept of modularity. The station is made up of modules, to be launched separately and assembled in space. It takes ten years to completely "assemble" it and, in the meantime, the Soviet Union as a political entity will be gone.

In 1983, with the idea of "aping" the Space Shuttle, the Mir programme undergoes a substantial cut of funds in favour of the Buran, which is nothing more than a Soviet version of the American shuttle. A very expensive programme, probably the most expensive of all Soviet space programmes. At the fall of the Soviet Union this programme is abandoned due to lack of funds. Although the shape recalls the Space Shuttle, the two shuttles are equipped with very different systems and the charge made against the Soviets of having "spied" the Americans to build it, is groundless.

Funding to Mir flows again in early 1984 and in 1986, on the second attempt, the launch of the station is successful.

The Space Shuttle and the Freedom

NASA in those years is also busy with another project that started in 1969. The United States is looking for access to space with reduced costs and that uses "non-disposable" means: the Space Shuttle must respond to these needs. But things are not going as they wish. The programme is more complex than expected, it collects exorbitant costs and security proves to be affected by the "short blanket syndrome".

Like other space programmes, also the Space Shuttle is not immune to spending budget cuts. In mid-1971 NASA, to economise, is forced to abandon one of the cardinal requirements, i.e. to obtain a completely reusable system.

On 12th April 1981, the Shuttle officially performs its first space flight, achieving 17 orbits in just over two days. Subsequently, the Shuttle allows the launch of numerous satellites, the Hubble telescope is among them, three interplanetary probes and contributes to the construction of space stations.

In 2011, after 135 launches, the American shuttle retires early.

Actually, NASA also announces years later, in 1984, the construction of a space station that will include a crew in permanent orbit. It is called Freedom and President Reagan approves the project. It will never be built because it is subject to continuous cuts in resources. What remains of the project is used for the future International Space Station.

The early 90s are full of news, which are all destabilising for the evolution of the aerospace sectors.

The Soviet Union falls and an internal historical moment of confusion begins, which leads to the suppression of the construction of Mir 2 (that would have taken the place of Mir).

NASA is helplessly witnessing the cancellation of funding for the construction of the Freedom station, so that the project aborts. Lacking a counterpart with which to measure oneself, it becomes less urgent for the Americans to imitate the Saljut programme and send an American version of the Mir into orbit.

Actually, in the world, all the space agencies are in serious difficulty for the cutting of the funds. The idea of a common project, which has the purpose of space exploration, appears to be the only consistent hypothesis.

The Space Station is a truly bright example of how international differences go completely into the background when you have a big goal, a common passion.
Samantha Cristoforetti

In November 1998 the collaboration between European space agencies, Russia, Canada, Japan and the United States bears the first fruits. Zarja is launched from the Baikonur cosmodrome, the first  module - Russian - of the future International Space Station.

A few days later, the US module Unity (Node 1) follows, which engages with Zarja, providing the possibility to add further elements.

Human beings continue their venture in space and the adventure of the ISS has just begun. But how did this come about?

In the early 1990s, Americans managed the leadership by involving space agencies from various continents. The plan is to build a joint space station. The idea is supported at the highest levels and in 1992 the presidents, George H. Bush and Boris N. Yeltsin, officially sealed the desire to explore space together.

The knowledge obtained from the efforts of individual agencies to create their own space station becomes common heritage. The sharing process brings shelved programmes to light and the confrontation opens up new possibilities. The design of the new station is established on the basis of the previously aborted American Freedom, of the MIR-2, which was set aside for the fall of the Soviet regime, and of the Columbus module of the European ESA.

With a few years of delay, in 2011 instead of 2003, the ISS is complete. The end of life of this station is 2024, the date according to which it should achieve all the scientific research objectives that the various agencies have set themselves to.

In May 2018 ESA selects Luca Parmitano for the Expedition 60 and Expedition 61 missions. The Soyuz Ms-13 spacecraft, launched on 20th July 2019, carries three astronauts: Andrew Morgan, Alexander Skvortsov and Luca Parmitano. The latter, in the second part of the mission, assumes command of the ISS, the first time ever for an Italian.

What will be the "end" of the House of the Astronauts is not known yet, the options are several. Until then many of us will continue to stare at the sky wondering what the next limit to overcome will be.

Commemorative envelopes of the launches, missions and extravehicular activities (EVA) with the postmarks affixed in the station. Handwritten letters flown from Earth to Space, and vice versa, by means of manned or unmanned spacecraft, such as Progress, Cygnus, Dragon, HTV and many more. Postal correspondence tells of life in orbit. It documents the history of human beings in space, their wit to reach it and tenacity to remain there.

Can an envelope trigger a strong feeling? Find it out here.
See all 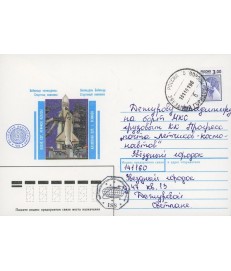 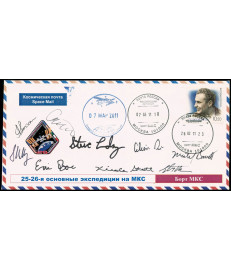