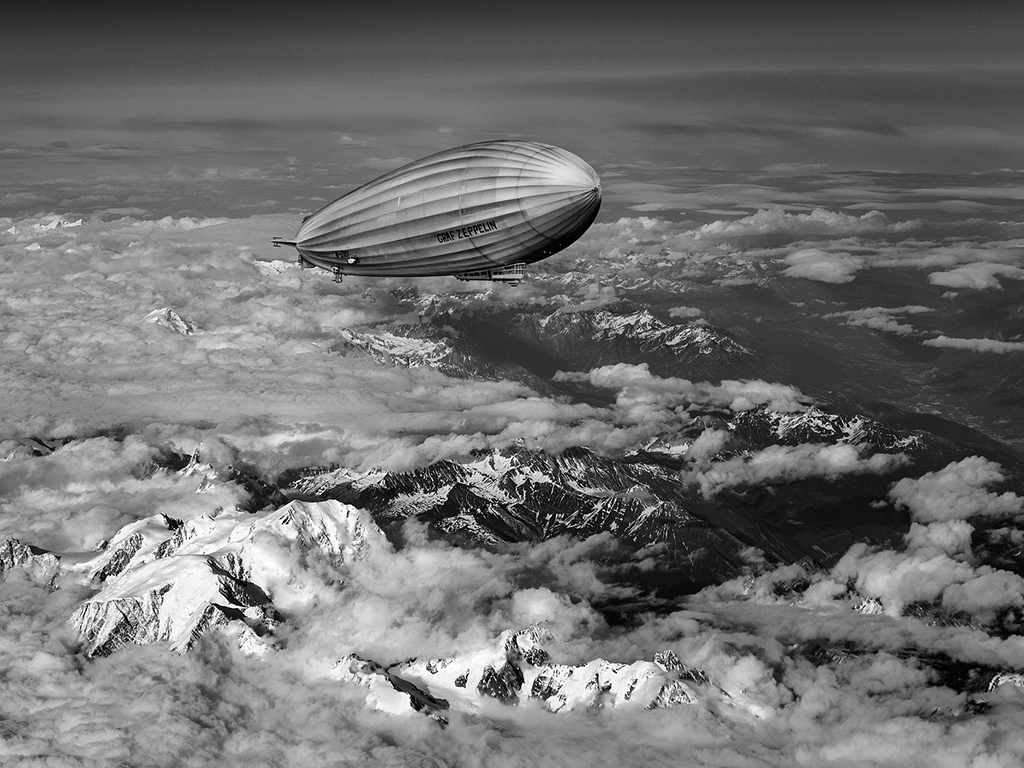 I can't make out how it could have happened. My team went through every single gear, every pinion and crown. Yet it happened. The balancing mechanism failed. And now, what will happen? The owner has invested every last Pfennig in this adventure.

These are the words that buzz like crazy wasps in the head of Helmuth, young engineer and technician of the Company for the promotion of flight with airships (Gesellschaft zur Förderung der Luftschiffahrt) at the end of the first flight of the LZ 1. It is the 2nd July 1900.

The investment plan for the construction of the first zeppelin had been received with so little interest that Count Ferdinand von Zeppelin had to resort to almost total self-financing to implement his idea.

Construction work on the prototype began in 1899, on a floating platform in the Manzell bay, in Friedrichshafen, on the shores of Lake Constance. Powered by two internal combustion Daimlers and balanced by means of a weight that could be moved between the two shuttles, LZ 1 was 128 metres long. Its flight lasted 18 minutes. A failure in the balancing system forced the airship to make a crash landing, causing the rescue of the five crew members and the escape of any possible investor.

Not even the next two flights, which went smoothly, reversed the beliefs of the possible financiers.

With a tired frown and a mopish expression Herr Zeppelin gathered his collaborators and communicated in a toneless voice:

“Proceed to dismantle the LZ 1. The company has ran out of resources to continue its business. I thank you all for your efforts, they would have deserved a better ending.”

New possibilities for a stainless dream

However, Von Zeppelin's ambition was not destined to remain frustrated. Thanks to the interventions of some supporters and a further financial effort on his part, he was able to resume the construction of new prototypes.

The success came with the LZ 3 model in 1906, which was built with many parts recovered from the previous model - LZ 2 - damaged by a storm in the Allgäu Alps, on which it had taken shelter for an engine failure.

The LZ 3 zeppelin travelled 4,398 kilometres in 45 flights and remained in service until 1908. The success was enough to attract the attention of the German army that purchased it. This zeppelin remained in line, with the function of school ship, until 1913.

"Herr Zeppelin, the High Command is more than interested in buying our LZ 4 too. It is clear that this changes the perspective of future developments. With the German army as our customer, investing in research and new models will no longer be a problem. The only thing they ask is a demonstration flight of the LZ 4 zeppelin before proceeding with the purchase."

Helmuth's enthusiasm that day was overwhelming. After the misfortune that had happened to the LZ 1 zeppelin, Count von Zeppelin had wanted him again in the technical staff.

Ferdinand von Zeppelin's skull was domed, with blond baldness and triangular jaw and with jolly but reckless eyes, fixed on the clouds, which he glimpsed from the lawn around his castle.
Geminello Alvi

From LZ 4 to Luftschiffbau Zeppelin GMBH

Unfortunately, the demonstration flight of the LZ 4 never took place. An August storm pulled it away from where it was anchored, sending it against a tree where it caught fire. A new standstill thus took place for zeppelins.

But once again the Count's lucky star ensured the future of his dream. The spontaneous collection of donations that followed, organised by one of the spectators of the disaster that happened at the LZ 4, was a real turning point. Over six million marks, the size of the funds received, allowed the launch of new initiatives, such as the Luftschiffbau Zeppelin GBMH and the Zeppelin Foundation.

"What happened next? The Luftschiffbau Zeppelin GBMH never stopped and built many zeppelins, over a hundred. Especially war airships, which were adopted during the First World War.

Then Germany was defeated in  the First World War. The prohibition to build airships was imposed in Germany with the Treaty of Versailles of 1919. But Herr Zeppelin did not have the time to suffer the shame of the ban as he passed away in March 1917."

Helmuth is always moved when talking about his employer's enterprises. Each time he adds a detail, an anecdote or a sentence in witness of von Zeppelin's dream. A dream to which he, Helmuth, had contributed so much to and that was destined to become history to be studied in books. Definitely a story to tell his grandson, so passionate about flying to not miss a joke of his incredible stories of airships and men.

Eleven years after the Count's death, the Zeppelin workshops built the LZ 127. Launched on the anniversary of the founder's date of birth, it was not the first of the post-war zeppelins but was certainly the most successful. More than eight million marks of the time were needed to produce it, a sum collected also thanks to a flying roadshow by Hugo Eckener - von Zeppelin's successor - and to the German Government.

In October 1928, Graf Zeppelin crossed the Atlantic for the first time. Having left Friedrichshafen on 11th October it arrived at the base in Lakehurst, in New Jersey, on the morning of the 15th after a flight of 9,926 kilometres in 111 hours. It was a complete success for Eckener, who had the honour of the celebrations, together with his crew, with a parade on the streets of New York.

The following year, 1929, LZ 127 travelled around the world, which was organised in two stages. The first American and the second German. In both, honours were given to the crew, who received a very warm welcome, and at the highest institutional levels, both in the United States and in Japan.

The year 1931 was the one of the trip to the North Pole. The venture was financed by an important exchange of mail to be carried out with a surface ship - the Soviet icebreaker Malygin - that the zeppelin would have encountered during its polar route. The creation of a special North Pole postmark, combined with a large advertising campaign, allowed a significant sales of stamps as well as the collection of 75,000 letters from around the world for about 300 kilogrammes in weight. The polar voyage was also the testing ground to measure the flight of zeppelins in extreme climatic conditions and to carry out a series of scientific researches in the meteorological and geographic fields as well as the measurement of the magnetic fields at high altitudes.

The journey ended on 31st July 1931 after 10,660 kilometres with a complete success and the total satisfaction of the participants. Zeppelins had been shown to have nothing to fear even at polar temperatures.

The LZ 127 still continued to fly for some time. Probably if the Hindenburg accident had not happened, it would have flown even more. Following the disaster of the LZ 129, flights were suspended and the LZ 127 airship found a permanent home in a hangar in Frankfurt as a tourist attraction.

At the outbreak of the Second World War the Reichsmarschall Göring, with the excuse of recovering aluminium, dismantled the zeppelin.

In fact, everyone knew that Hermann Göring was never fond of zeppelins.

Airmail transported by zeppelins is rare and precious, discover it here.
See all 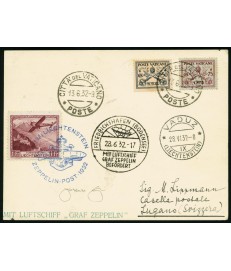 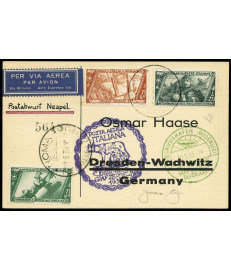 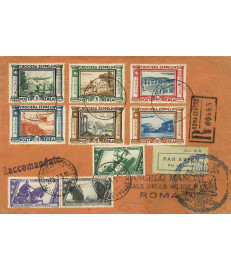 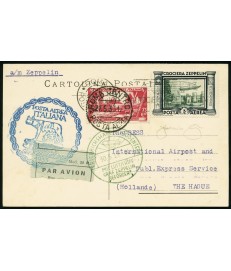