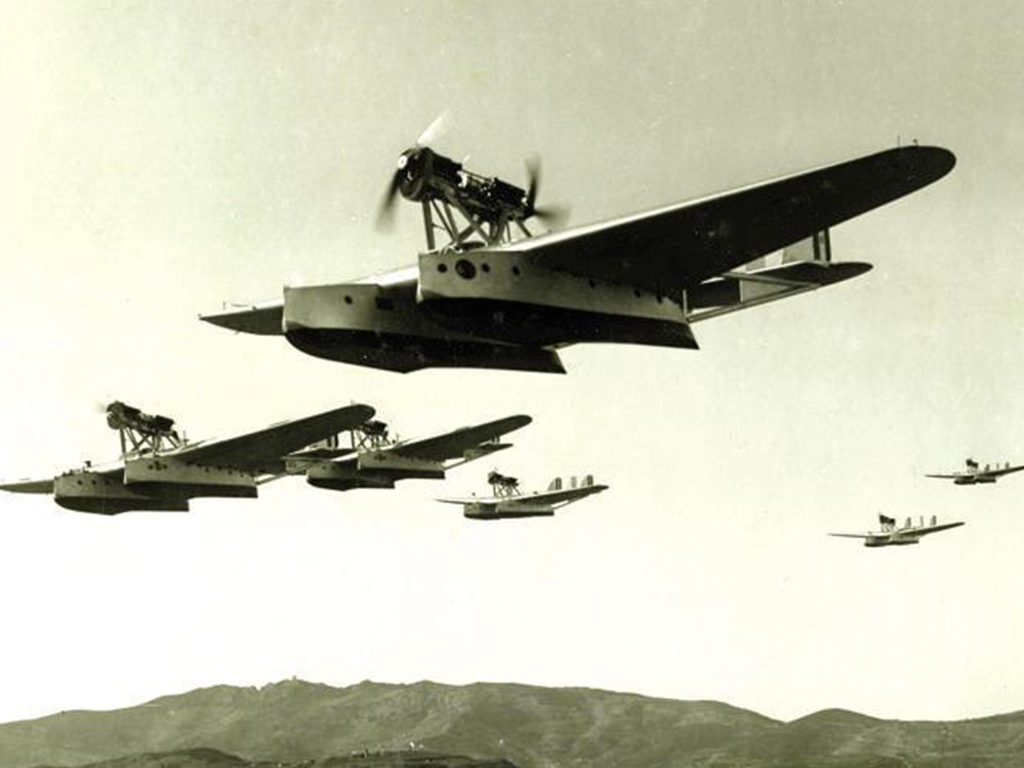 Clear skies, clear sea. An afternoon of a day like any other in Tobruk, if only we were not in 1940 and Italy at war. A Savoia-Marchetti trimotor appears in the distance, you hear the noise, it is commanded by a personality. It is Italo Balbo, aviator of undisputed fame because of his flights. But also a political personality of the Fascist Party, sent by Mussolini himself to be the Governor of Libya.

The landing runway approaches, Balbo loses altitude and begins the approach manoeuvres. Suddenly the sky rumbles, it takes little to understand that he is being attacked from the port.

The cruiser San Giorgio defended itself, that same day, from an incursion by the British, some Bristol Blenhien. When the outline of the Savoia-Marchetti trimotor appears in the sky - recalling the English airplanes - it doesn't take much for the sailors to rush to the artillery and target it.

So Italo Balbo dies, and with him the whole crew, crashing on the ground engulfed in flames, victim of the friendly fire.

The Aviator and fascism

Someone later insinuated that it was not an accident. Italo Balbo received the appointment as Governor of Cyrenaica from the Duce, probably because he was considered cumbersome on the scene.

In the eyes of many, some of his stances contest those of Mussolini. Balbo does not approve the beginning of the war, the Pact of Steel with Nazi Germany as well as the racial laws. In fact, he continues to meet his "Jewish" friends as he always has. Balbo is a fascist of the first hour, very active, and with a good dose of brain combined with extraordinary organizing ability. His career is sparkling, to say the least. From joining the Fascist party, to being nominated as a quadrumvir at the time of the march on Rome, up to being appointed as the general commander of the Voluntary Militia for National Security (MiliziaVolontaria per la Sicurezza Nazionale) and, subsequently, Undersecretary for the National Economy. In 1929 he became minister of the Royal Air Force with the task of reviving Italian aviation and making it a flagship for the regime to show off. Aeronautical cruises can be considered part of Balbo's strategy to achieve this goal. A cunning historical reading suggests that he organised them more for personal passion than for other purposes. But we will never know.

Balbo was already thinking about this undertaking during 1927. The exercises carried out on his instruction by the maritime bombing departments are a proof of this. These are flights in formation over long distances.

General De Pinedo, already famous for his solo flights, is invested with the title of commander of the cruise, being the best Italian expert in long distance air navigation. The chosen route is the following: Orbetello, Elmas, Pollenza, Los Alcazares, Puerto de los Alfaques, Berre, Orbetello, 2,800 kilometres of flight.

During the journey the aircraft are escorted by two destroyers of the Royal Navy, the Sauro and the Nullo.

61 aircraft take part in the enterprise, taking off on 26th May 1928 and returning on the following 2nd June, without reporting any failures or accidents.

The enthusiasm touches peaks of particular intensity both in Spain and France, such that Admiral Vindry, commander of the fortified harbour of Toulon, has no problem in declaring the cruise as  "the largest manoeuvre of aircraft carried out in the world".

I think that today we must look for new targets for the race... of our flying men, not so much in individual raids, but in collective cruises formed by several squadrons...
Italo Balbo, Chamber of Deputies, 23 March 1928

The year 1928 comes to an end and Italo Balbo lays the foundation for a new initiative. In the executive order sheet, he presents the enterprise with the name of "Education cruise of a detachment of maritime bombing".

The flight formation incudes 35 aircraft, while the detachments that are entitled to participate are the 86th group (Brindisi), the 91st group (La Spezia), the 192th squadron (Pola) and the 3rd Z.A.T. Flight detachm. (Vigna di Valle).

Navy transmitting stations are installed on the aircraft of the formation leaders and on that of Balbo. In addition, particular attention warrants that any common damage compromises the cruise: each plane is equipped with spare parts and armaments for the defence, four machine-guns and bullets.

The seaplane base of Taranto witnesses the take off of the flight formation at dawn on 5th June 1929, headed to the second stop, Athens.

In support, as in the previous cruise, the Royal Navy deploys the explorer Riboty, as well as the destroyers Calatafimi, Curtatone, Monzambano and Palestro, among the waves.

The arrival in Orbetello, which marks the end of the cruise, also marks the end of the friendship between Balbo and De Pinedo. The latter took care of the organisation, which was perfect, also in this undertaking. But previous disagreements, and party manoeuvres, ensure that the press does not pay any tribute to the aviator General. The reasons for this treatment emerge later, through the mouth of Balbo himself: De Pinedo was one of the protagonists of the solo flight together with Nobile, Mecozzi and Guidoni. From the very beginning Balbo had perceived these figures, idols of the crowds, as individualists in search of glory and autonomy of personal thought, and, therefore, incompatible with the guidelines of the regime. And, thus, incompatible also with his ideology.

The time has come to accomplish an even bolder undertaking. An Atlantic flight in formation is unprecedented. The designated destination? Rio de Janeiro.

NADAM, the High seas navigation school, is established in Orbetello, with the aim of instructing crews able to face a flight across the ocean. The aircraft involved in the mission are 12 Savoia-Marchetti S.55A seaplanes.

On 17th December 1930 the seaplanes take off under the guidance of Balbo and his second pilot, Stefano Cagna.

The Atlantic flight represents the most demanding and dangerous stage of the cruise. The aircraft, filled with maximum fuel, have difficulty taking off, and the overheating of the engines causes the interruption of the operations. Also in the take-off phases, an accident involves two aircraft, causing the death of the pilot of one, and the entire crew of the other. Unfortunately, the  misadventures do not end, even after take-off. During the flight two other aircraft are forced into a landing, one manages to resume the flight while the other is missing.

On 15th January 1931 the remaining aircraft, with the crews in bad shape, reach Rio de Janeiro.

Not long passes, just a few months, from the end of the first transatlantic aviation venture, that Balbo comes up with a new group cruise proposal. The initial idea, rejected for costs and difficulties, involves circumnavigating the globe. The second choice falls on the universal exhibition in Chicago, which is held in 1933 for the centenary of the foundation of the city. A unique opportunity to celebrate the first tenth anniversary of the Royal Air Force. Balbo in his speeches defines it as “the Atlantic jump in mass”.

Twenty-five SIAI-Marchetti S.55X seaplanes participate in the undertaking, divided into eight squadrons. Once again the Italian Royal Navy is present with its logistical support. In the bay of Cartwright there is the ship Alice, the submarines Balilla and Millelire and the two minesweepers Matteucci and Biglieri, which perform the function of radio beacons.

On 15th July, the American population celebrates the arrival of the Italian aviators, who land on Lake Michigan, and three days later reach the lights of New York.

On 25th July, the seaplanes take off for the return flight, arriving in Italy on 12th August and concluding the last mass cruise. Unfortunately, not without accidents. On the outward journey, after a 1,000-kilometre stretch, in Amsterdam, one of the seaplanes capsizes and a motorist sergeant loses his life. Another seaplane rolls over on the return journey, an officer dies and the aircraft is destroyed.

In commemoration of this undertaking, two airmail stamps from 1933 are issued for Italy, consisting of three parts that can be separated by means of lateral perforations. 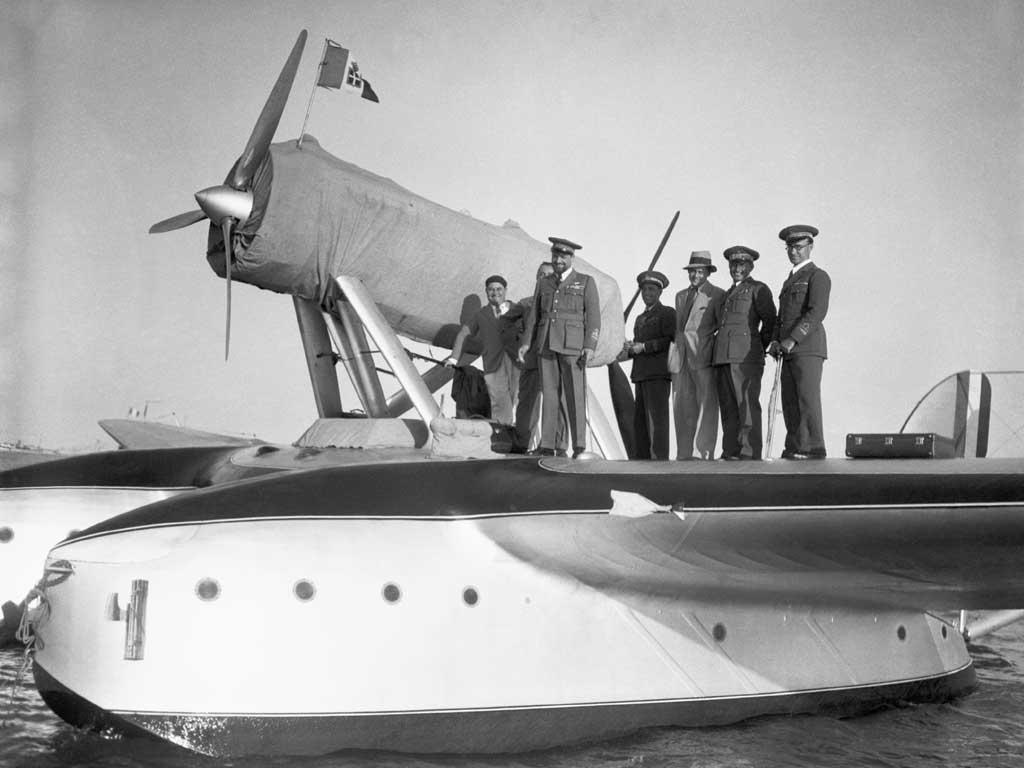 The Atlantic flight with the SIAI-Marchetti S.55X seaplanes has economic implications, as well as function of propaganda. The performance of the Italian aircraft impresses the Brazilian government, which buys them en masse for the equivalent of 50,000 bags of coffee.

It must be said that Italo Balbo and his seaplanes were not the only prominent aeronautical presence at the Chicago Universal Exposition. Two months after the arrival of the Italian pilots, Hugo Heckener in command of airship Graf Zeppelin also came to visit the Century of Progress. The United States post office issued a stamp, for the occasion. The undertaking of Balbo's squadrons, however, had impressed the crowds significantly more, so much so that it was awarded the definition of "most colossal enterprise in the history of the Air Force" by the Times".

The airmail that travelled during all the stages of the cruise, fragments of paper that once again tell of one of the most incredible aviation feats of mankind.

Relive the boldness of Italo Balbo now, here.
See all